Sponsored by: The Black Student Alliance, The NAACP at UVA, The Diversity Initiatives Committee of Student Council, The Organization of African Students, and the University and Community Action for Racial Equity }

Please join us in our first annual commemoration of the lives of those enslaved laborers who were central to the construction and early everyday functioning of the University of Virginia. We will partake in a candlelit silent march from Old Cabell Hall, to the North Side of the Rotunda, where we will hear from faculty and student supporters of the movement. The purpose of the commemoration will be to symbolically recognize the lives of the enslaved laborers by gathering supporters at the heart of the University, until an acceptable physical memorial is established.

(If your organization would like to be listed as a supporting organization for this event, please contact acf2f@virginia.edu)

Thank you everyone for your continued support for MEL!

Here is an amazing exhibit located on the first floor of Albert and Shirley Small Special Collections Library, themed “Working Without Wages: Enslaved Laborers at the University of Virginia, 1819-1865”, open to the public from January 20 to February 29, 2012.

For more information about the exhibit, please visit: http://www.virginia.edu/mlk/2012_Exhibit.html

It is only in memory that all souls attain eternity!

On Wednesday night in the Dome room of the Rotunda, City Councilor Dede Smith read a proclamation declaring Jan 25th 2012 “Henry Martin Day” in Charlottesville. Who is Henry Martin?

Mr. Henry Martin was a life-long resident of the Charlottesville community, having been born enslaved at Monticello on July 4, 1826, the day Thomas Jefferson passed away. He spent his youth in slavery, working at a boarding house on Carr’s Hill, and as a young man about 1845, was sent to work as a janitor and as official bell-ringer at the University of Virginia. He rang the bell in the Rotunda and later in the University Chapel for 53 years, marking each hour, from 4 a.m. to 10 p.m., and served as a nurse and doctor’s aide during the U.S. Civil War as part of the Charlottesville General Hospital, helping to comfort and save the lives of thousand of wounded and sick Confederate and Union soldiers.

A long-time member and a noteworthy figure in the life of Charlottesville’s historic First Baptist Church, Henry Martin lived much of his life on Tenth Street, and had four daughters with his second wife Patsy Washington Martin. He passed away at age 89 on October 6, 1915, and was laid to rest in Charlottesville’s historic Oakwood Cemetery. It was reported that his funeral was among the largest Charlottesville has seen since the death of Thomas Jefferson. At the time of his death, it was also reported that Mr. Henry Martin “was known personally to more [University of Virginia] alumni than any other living man.”

It was a great honor to have Mr. Henry Martin’s 87-year-old great granddaughter, Ruth Fleming Hunt of Philadelphia present at the evening event. It was amazing to realize that the moment we are living now is the continuity of history – people in the past were once no less vividly living their lives as we are now, and we are the history in process. Some people questioned the mission of our Committee whether it would be more helpful to spend money on solving current problems than building a new memorial, or if the new memorial would deepen the wound left by history. The University’s recognition of Henry Martin’s enduring legacy is a hint to such worries: the establishment of a new memorial is not to draw a conclusion to the history, but to provide a more humane perspective on the often too abstract social problems by animating the history. Our Committee will meet with the University Faculty Senate members next week in seek of faculty support. At the same time, we are looking forward to establishing regular connections with organizations in Charlottesville community. We are one!

To watch the video of “The Enduring Legacy of Henry Martin” Symposium and read detailed report on Wednesday’s events, please visit:

To read more about Henry Martin and the legacy of enslaved laborers in the building of the University and Charlottesville community, please visit:

Preserving our Past, Framing our Future: An Open Forum

On November 2nd 2011, the Memorial for Enslaved Labors in the University of Virginia presented “Preserving our Past, Framing our Future: An Open Forum”. University Students, faculty, and Charlottesville community members from diverse backgrounds joined the Forum, and generously shared their wisdom on the future course of our project to have a more proper Memorial on ground to commemorate the enslaved laborers who constructed the University.

The Forum opened with an introduction by Annacrizelda Funtelar, Chair of out Committee. Annacrizelda briefly stated the purpose of the Forum and introduced to the audience MEL committee members, cosponsor organizations, and the Faculty Advisory Committee. In the first half of the Forum, our Committee members presented the history of the project and the top three submissions to the Memorial design competition launched earlier in the Spring of 2011, in order to invite University students to participate in our project, as well as to update the loyal supporters of the project with our lately progress. Guest speaker Professor Claudrena Harold extended the scope of the Forum beyond the project. Succinct but insightful, Professor Harold’s speech traced back in history, examining the collective wound left by the institution of slavery and inspiring the audience not only to lament the history but also actively construct a better one of our own. Professor Claudrena’s speech heated up the audience, and in the following dialogue session, more and more audience engaged in the discussion. The inadequacy of publicity and urgency of the project was picked out by sharp eyes; nevertheless more sophisticated and inspiring suggestions sprang up as the dialogue went on. Time always passes swiftly for people with genuine passion and dedication. The Forum was concluded with the endorsement from all the cosponsoring organizations of our project, including Organizations of African Students, Black Student Alliance, NAACP, OAAA, and Student Council Diversity Initiative Committee.

We have a dream that the day will come when the new Memorial for the enslaved laborers becomes the pride of the University of Virginia and the Charlottesville community, and we have faith that the dream will come true because we will “Never let the spirit die!” 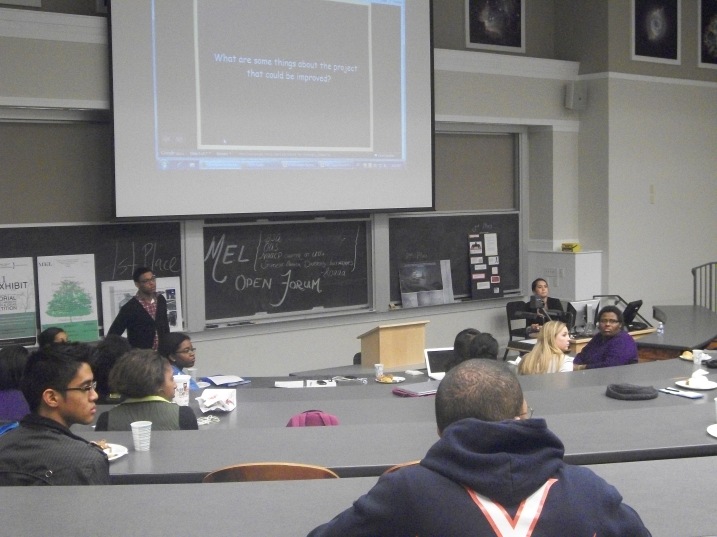 The movement to establish a more adequate memorial to the University of Virginia’s enslaved laborers was officially launched in the Fall of 2009. The project idea came from community concerns raised over the infrequent presentation of the history of slavery at the University.  Initiated by the Diversity Initiatives Committee of Student Council, the project gained a lot of support from groups and individuals, from both within the university and outside of it. From the very early stages, a close partnership with the University and Community Action for Racial Equity (UCARE) developed.  In the first year of the project, a lot of groundwork was laid. Some of these accomplishments include:
–  Unanimously passing a Student Council resolution affirming the timeliness and necessity of the project
–  Distributing a university-wide survey to gauge community knowledge of the history; the survey returned over 900 responses
–  Organizing  an educational forum on the intricacies of race relations in the University’s history, with a special focus on slavery
–  Organizing focus groups on and off Grounds to get community feedback on the need for a memorial, the form it should take, and its effect on our community
–  Forming an advisory committee consisting of expert faculty, staff, and community members

Currently, the project is an equal collaboration among Student Council, UCARE, and the Black Student Alliance.

Why We Need A Memorial for Enslaved Laborers

–  Students’ love for the University extends to all those who contributed to the construction of the University. Without the efforts of enslaved laborers, we would not be able to enjoy the gifts of the University of Virginia. As such, we should give back to them.
–  Justice was of central importance to Thomas Jefferson; and justice is precisely what will be served by constructing a commemorative memorial for enslaved laborors.

–   “It is certainly for the good of the whole nation to assimilate as much as possible all its parts, to strengthen their analogies, obliterate the traits of difference, and to deal law and justice to all by the same rule and the same measure.” –Thomas Jefferson: Batture at New Orleans, 1812. ME 18:80. By initiating a new slavery memorial created by a student at the University of Virginia, the University community would embody Jefferson’s emphasis on dealing with justice and strengthening relationships and analogies among all races.

–  Our current memorial is, both physically and symbolically, insufficient to truly do service to the contributions of enslaved laborers.
–  Constructing a new memorial is consistent with the University’s goal of commemoration.

–  The memorial would enhance the university’s standing as embracing of its history and devoted to the cause of equal educational opportunity for all.

–  The legacy of the institution of slavery continues to persist today with extensive racial inequalities within the city of Charlottesville and the Commonwealth of Virginia at large regarding income level, educational attainment, and health care access.

–  The University of Virginia is a a leader in public education in the country, and as such should be at the forefront of movements to commemorate history.

Overall, community feedback for a more appropriate memorial for enslaved laborers was supportive.
Process: UCARE (University and Community Action for Racial Equity) and the Diversity Initiatives Committee of Student Council hosted multiple focus groups in order to garner community feedback about the memorial.  Each focus group drew participants from the University community (including faculty, students, and staff) and the greater Charlottesville community.

Welcome to the website for the Memorial for Enslaved Laborers Design Competition.  We hope to answer any of your questions with one of the tabs above. Registration will run from November  24, 2010- February 10, 2011 and is open to all past and current University of Virginia students.  For any questions not answered please email memorialforenslavedlaborers@gmail.com

Join the dozens who have already registered!

Thank you for your interest and we look forward to your entries! 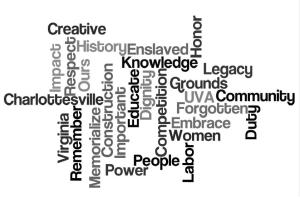